Twice a year, on the spring and autumnal equinoxes, the sun rises from the summit of Mt. Miwa, passes over Mt. Nijo, and sets in Osaka Bay. The trajectory of the sun forms a straight line connecting Mt. Miwa and Mt. Nijo, called the "Road of the Sun. "That road eventually formed the "Road of the Dragon," with Ohmiwa Shrine on Mt. Miwa being the head, and Nagao Shrine on Mt. Nijo as the tail.Ancient royal authorities built various sizes of burial mounds, primarily massive keyhole shaped tumuli, to serve as royal burial sites. These form a cluster of tumuli along this road running east to west, from the foot of Mt. Miwa to Mozuno.Adorned with fukiishi stones and haniwa clay figures, these shining white tumuli were concealed by trees and remolded by the mountains over time.The Shiratori no Misasagi tomb along the road is beautiful with its moats full of water next to the greenery of the tomb, delighting those traveling the road.The Takenouchi Kaido / Yokooji highway was built on these lands, constantly observing the stage of history. 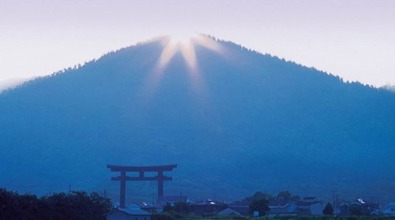 In 613, Takenouchi Kaido / Yokooji was pivotal to Naniwa-tsu harbor, the gateway to diplomacy and politics.It is the oldest highway in Japan, extending 40km and maintained as the road linking Asuka and Oharida no Miya.It is comprised of an upper, middle, and lower road: the Naniwa Daido road due south from Naniwa-kyo Suzaku Oji, the Takenouchi Kaido running from Sakai to Kawachi, and Yokooji running east-west along the Nara Basin.Later, Fujiwara-kyo was built based on this road, which still remains as a way of dividing east, west, south, and north.In Yagi-cho, Kashihara, the road is still 24m wide just as it was in ancient times, allowing visitors to experience the size of the road as it was. Much culture was brought by diplomats and envoys from China and the Korean peninsula over this road.Along with this came Buddhism, with Shotoku Taishi and other devotees building many Buddhist temples along the road.At Yachuji and Sairinji, visitors can see the remains of towers, foundations, and cornerstones from the Asuka period.Shitennoji and Eifukuji, closely related to Shotoku Taishi, have sprawling temple grounds with magnificent monasteries, while at Taimadera, one can see the only surviving Tempyo period double-tower monastery in Japan. The Bon Festival court dance at Shitennoji and the Nerikuyo service at Taimadera are some examples of ways visitors can experience the ambience of ancient times.Another setting where visitors can experience the base is on the road from Taishi-cho to Katsuragi, which goes over Mt. Nijo on the border between Osaka and Nara.Iwaya Pass is known for its sanukite and tuff, and is the location of a rare sight in Japan: the cavern shrines of Rokutanji and the Iwaya Caves.Taishi-cho at the foot of Mt. Nijo enshrines Emperor Bidatsu, Emperor Yomei, Empress Suiko, Emperor Kotoku, and Shotoku Taishi, and is also known as the "Valley of Kings."This land is also called Kawachi Asuka/Chikatsu Asuka, and is the road where the people of Asuka traveled from the capital of Asuka in Yamato. Japan's journey as a nation starts from this road, and here we can witness historical proof of that. 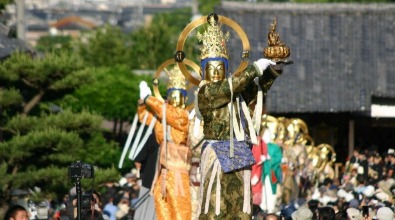 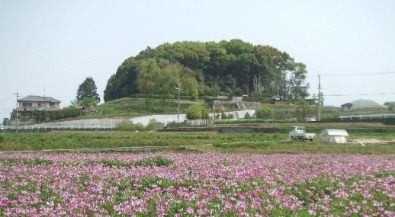 Continuing throughout history, this road became a highway for transporting commodities between towns as it entered the Middle Ages.Above all, Sakai on the road's western edge and Imai-cho on the eastern edge became the two major cities driving the country's economy in the Middle Ages.In the Muromachi period (1336-1573), Sakai held immense economic strength as the harbor city for Japanese trade with Spain, Portugal, and the Ming Dynasty. The town facing out onto Osaka Bay surrounded its three remaining sides with deep moats, building the autonomous city of Sakai. Many Christians visited this land, including Francis Xavier. It was even called "The Venice of Japan" by Luís Fróis.Sakai also won its fame as the hub for metal casting technology. Near the intersection of Takenouchi Kaido and Nakakoya Kaido (formerly Kawachi no Kuni Yakami-gun and Tannan-gun) were craftsmen known as the "Kawachi Casters," who were involved in restoring the Todaiji Daibutsu statue and casting the Kamakura Daibutsu statue.From the Warring States period (1467-1590) to the Edo period (1603-1868), guns and blades were manufactured in Sakai. Even in the present, the world-famous tradition of Sakai knives continues. There are still gunmakers and Edo period townhouses remaining, where one can hear the sound of knives being tempered. The influence of tea ceremony culture originally spread from Sakai by Sen no Rikyu remains at every turn, and the old Japanese confectioneries add an accent to walks about town. Along the highway, there are a number of towns built within temple compounds due to the advancement of the Jodo Shinshu Honganji school of Pure Land Buddhism.Imai-cho was the temple town of Shonenji in the Sengoku period, and just like Sakai, a moat was dug around it and an autonomous city was created. They continued to resist Oda Nobunaga, but eventually surrendered, and after settling through the mediation of Akechi Mitsuhide and wealthy merchants from Sakai, they were granted autonomy by Nobunaga. Afterwards, the area grew into the economic heart of Yamato.In this way, both towns were intimately connected to the nations of Southeast Asia through trade, and were the cities that built the Japanese economy from the Sengoku period to the start of the Edo period: "along the sea, Sakai; inlands, Imai." 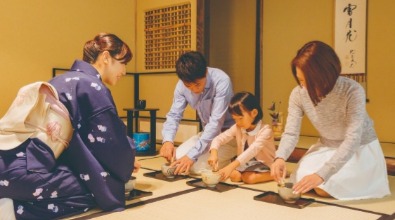 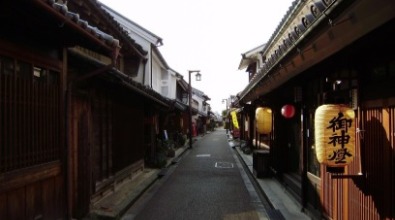 As the Edo period (1603-1868) began, the highway's role changed to that of the road for mass pilgrimages to Ise Grand Shrine from Osaka and Nara.Even now on the road from Taishi to Katsuragi are signs and lanterns serving as guideposts to shrines and to Ise, showing traces of the street's activity through inns and tea houses. Edo period townscapes remain in Yagi Fudanotsuji and Imai-cho, with approximately 500 traditional buildings.In town, travelers can relax at cafes and lodgings using old Japanese-style houses.In this way, the road was bustling as a route for the faith of the common people starting from the Edo period, and fulfilled the role of transporting people and their wishes. 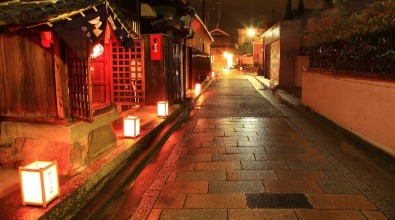 Once, Shotoku Taishi entrusted a sovereign message to Ono no Imoko for Emperor Yang of the Sui dynasty: "The Emperor in the Land of the Rising Sun sends a letter to the Emperor in the Land of the Setting Sun. "He sent envoys from the capital of Asuka through Naniwa, and many people, things, and cultures came and went over the passage of history and on the road that saw these envoys. The road changed its role bit by bit to suit each era and continues to thrive today. Through the historical heritage sites along the road, we can feel 1,400 years of changing history. The road invites us to travel through time. On April 28th, 2017, the highway was certified as a Japan Heritage, as "Japan's Oldest Highway: Takenouchi Kaido / Yokooji, An Eternal History Over 1,400 Years."

The Japan Heritage portal site can be visited here:
https://japan-heritage.bunka.go.jp/en/stories/story044/ 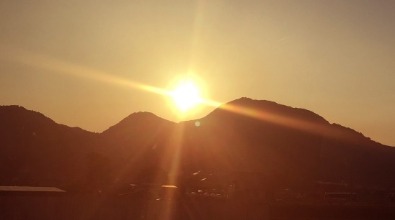